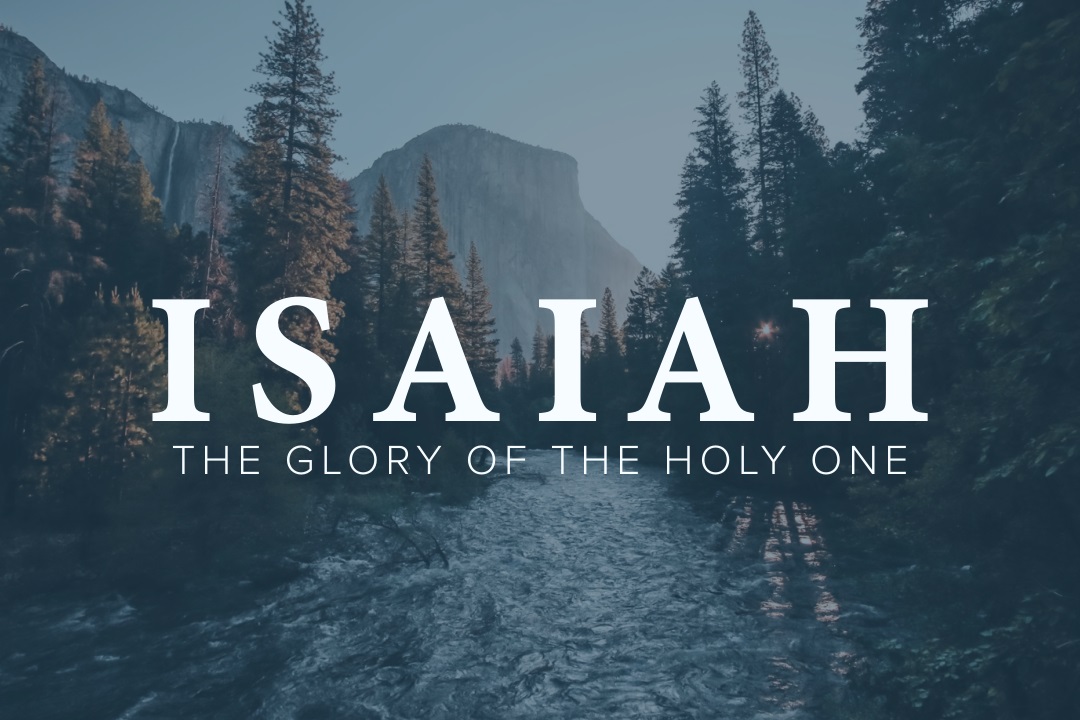 On Sunday, July 14th, we will be diving into the Old Testament to begin a new sermon series through the book of Isaiah. Lord willing, we will be going back and forth between Acts and Isaiah over the next couple years as we continue to preach through both books.

Isaiah proclaims a message of both judgment and hope that reveals the glory of the Holy One in a breathtaking way. Through the word of Isaiah we see that the impending judgment on Jerusalem and the nations will prepare God’s people for the coming of their Messiah and God’s kingdom on the earth. Ultimately, Isaiah reveals the glory of Jesus Christ—the anointed king and suffering servant through whom God would establish his kingdom on earth in righteousness.

The Importance of Isaiah

Isaiah has been called the “Romans” of the Old Testament, for it is here that we most clearly see all the thematic strands of Scripture woven together to give us the big picture of God’s purposes for his people and the world. This book is quoted and alluded to over one hundred times in the New Testament, making it one of the most referred to OT books along with the Psalms.

Due to its famous messianic prophecies Isaiah has also been considered the “fifth gospel” by Christians for centuries. This is where we find the promises of a virgin bearing a son who is called Immanuel (Isa. 7:14); a son being given whose name will be “Wonderful Counselor, Mighty God, Everlasting Father, Prince of Peace” (Isa. 9:6-7); the branch of the Lord (Isa. 4) and the root of Jesse (Isa. 11); and the Suffering Servant who would be pierced for our transgressions (Isa 53). As Jesus begins his public ministry, he reads Isaiah 61:1-2, showing that he was the fulfillment of all the prophecies about the Servant of the Lord (Luke 4:18-19). If we want to have a better understanding and deeper appreciation of who Jesus is, what he came to do and why, we must read Isaiah.

Isaiah lived in Jerusalem and prophesied from at least 740–700 BC (possibly to the 680s), in the days of the Kings Uzziah, Jotham, Ahaz, and Hezekiah (Isa. 1:1). His ministry was preceded by the prophets Hosea and Amos, who prophesied to the northern tribes of Israel of their impending judgment. By the time Isaiah’s ministry began, the northern tribes of Israel were in decline and about to be destroyed by Assyria (which was completed by 722 BC).

Like his contemporary Micah, Isaiah prophesied largely concerning Judah and Jerusalem. He warned the people of Judah that their sin would be met with God’s wrath, but also spoke of a day when God would return them from exile and make all things new. Although Israel had seen many faithless kings, Isaiah gave them the hope that God would be faithful to his promises and that the true Davidic King would reign in righteousness and peace.

Here are some of the many themes that we explore over the course of this sermon series:

Judgment and the Hope of Salvation. This is the primary theme of the book which shows up in virtually every chapter. God’s enemies will be destroyed and judgment will come. But for God’s chosen people, this judgment would serve as a purging. God’s kingdom will one day be established and Jerusalem will again be called the city of righteousness, the faithful city (Isa. 1:26). Through the death of his “suffering servant” (more on him below), God would show his steadfast love by forgiving the sins of his people and extending his grace to the nations (Isa 2:1-5; 19:16-25).

The Holiness of God. Of all the books of the Bible, Isaiah arguably gives us the clearest and grandest vision of God’s holiness and utter uniqueness. He alone is the one true God, “the Holy One of Israel.” There is no one else like in him in all creation, for he is the transcendent and self-existent Sovereign (Isa. 6). Chapters 40-48 provide a beautiful picture of God’s incomparability to the pathetic pagan gods formed by human hands. God is not only the Creator of the universe but the Lord of history, declaring the end from the beginning (Isa. 46:9-10). In light of God’s holiness, and our sinfulness, the question underlying much of the book is: how can a holy God forgive his people without compromising his holiness?

Trust in God. Israel’s sin—and all sin for that matter—can be boiled to down to a failure to trust in God. Rather than trusting in the Holy One of Israel, God’s people turned to foreign nations like Egypt and Assyria and put their trust in political alliances. But it is only through trusting in God and his promised Messiah that God’s people will be saved from judgment and flourish.

The Messiah. Right from the start of the book, it becomes clear that Israel’s corrupt leadership is one of the main causes of Israel’s unfaithfulness (Isa 1:23). Yet God promised that one of David’s descendants would rule with righteousness and be what all other human leaders failed to be and do what all other rulers failed to do. The book goes on to speak of a “servant,” a “man of sorrows,” who would accomplish God’s purposes of salvation, bearing the sins of his people and being a light to the nations (Isa. 42; 53). What we discover book is that promised Davidic king in chapters 1-39 would be none other than the suffering servant introduced in the second half of the book, chapters 40-66. And as the New Testament unfolds, it becomes clear—for those with eyes to see and ears to hear—that the suffering servant-king is none other than Jesus of Nazareth.

New Heaven and Earth. The final chapters of the book give a beautiful description of a new creation in which God will rule as King, judging the wicked and establishing everlasting peace, joy, and rest. The book of Revelation picks up many of the new creation themes found here in its description of the new Jerusalem (Rev 19-22).